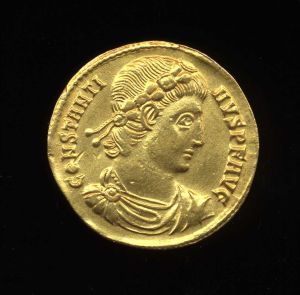 Flavius Julius Constantius was the son of Constantine I and Faustina, born in 314. He was made Caesar while young, along with his brother and Licinius II in 317.

Upon the death of Constantine I, Constantine II and his brothers Constantius and Constans swiftly crushed Dalmatius and Hannibalianus (nephews of Constantine also claiming power). They divided the empire and Constantine II received Spain, Gaul, and Britain. Soon thereafter he quarrelled with Constans over this division, and in 340 he crossed the Alps and tried to invade Italy. He died near Aquileia in an ambush.