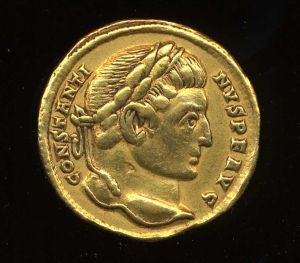 Gaius Flavius Valerius Constantinus was born in 272 or 273 at Naissus to Helena and Constantius I. He was named Caesar of the west in 306, and gradually consolidated power by marching on Maxentius and conquering Rome, then marching on his co-emperor Licinius and eventually ousting him as well.

Constantine became Augustus in 313, shortly after his defeat of Maxentius. He struggled with Licinius I over the naming of their respective sons as caesars, and only in 317 after a number of battles did they compromise and name Constantine’s two sons as well as Licinius the Younger as caesars.

Constantine converted to Christianity and made it legal in the Roman empire; historians like Eusebius glorify his deeds but in reality he was a tricky military commander and ruthless leader. He was responsible for the deaths of his son Crispus and second wife Fausta, and appears to have practiced both Christianity and worship of the sun-god until at least 312.

He also instituted a number of new measures, including a severe tax on city residents every four years. The Christian minority generally liked the emperor, though they too complained of his taxes. His lasting legacy is probably the demotion of Rome as Constantine founded a new capital at Byzantium. He had rarely lived in Rome anyway, and disbanded the Praetorian Guard—one of the city’s status-markers as the imperial capital.

Constantine was baptized as he lay dying, by Eusebius. He was on campaign against the Persians at the time, and his body was buried in Constantinople.

Other resources about Constantine I

View all coins recorded by the scheme attributed to Constantine I.