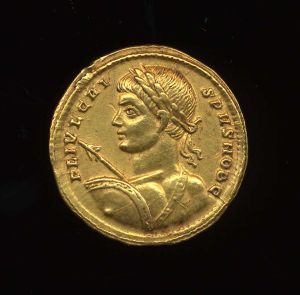 Crispus was the son of Constantine by his first wife, Minervina. He was made Caesar while still young, along with his brother and Licinius II; Crispus greatly aided his father in the wars against Licinius, and as reward Constantine gave him control of the western provinces.

In 326, Constantine met with Crispus in Pola (Istria). There, Constantine executed Crispus for adultery. The story is unclear, but Crispus may have had an affair with Constantine’s current wife Fausta, or may have been living out-of-accordance with his father’s recently-passed moral legislation. Sources also suggest that Fausta framed Crispus.

Other resources about Crispus

View all coins recorded by the scheme attributed to Crispus.