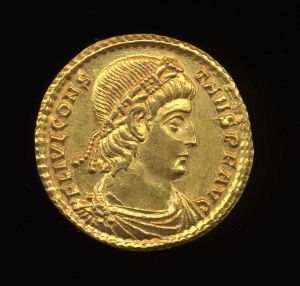 Flavius Julius Constans was born around 320 to Fausta and Constantine I. He became Caesar in 333, and when the empire was divided after Constantine I’s death he received Italy, Africa, and the Balkans.

In 340, Constantine II invaded Constans’ territory and was killed, so Constans became sole ruler in the west. He successfully fought the barbarians for the next ten years, but in 350 heard about the revolt of Magnentius and headed for Augustodunum. Constans fled to Spain, but was murdered in the Pyrenees at the fortress of Helene.

Other resources about Constans

View all coins recorded by the scheme attributed to Constans.