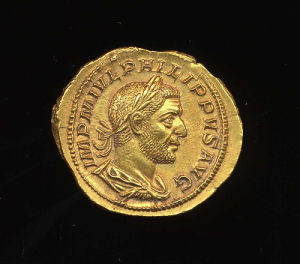 Philip I, or Philip the Arab, was born ca. 204 in Arabia. He rose through the army to become Praetorian Commander under Gordian III; during the Persian campaign, his troops gave him their support against Gordian and made him emperor. He killed Gordian and later deified him in Rome.

Philip soon agreed to peace terms with Persia, though with terms that many Romans considered insulting: he made a huge down-payment and accompanied it with an annual indemnity. The emperor then spent much of his time on military campaigns, and made his young son Augustus in 247. He built a large reservoir at Rome to help with chronic water shortage, and celebrated the 1000th anniversary of the founding of Rome with a series of festivals and games in 248.

Two uprisings broke out in 248; the first, Pacatian was named emperor by the Danube troops, but the soldiers then killed him. In the east, Jotapian was proclaimed emperor and not suppressed for almost a year. Two other rebellions are known only from coinage.

Philip died in battle as Decius, a commander he had appointed to deal with the Goths, attacked him in Macedonia.

We have recorded 125 examples.

Other resources about Philip the Arab

View all coins recorded by the scheme attributed to Philip the Arab.