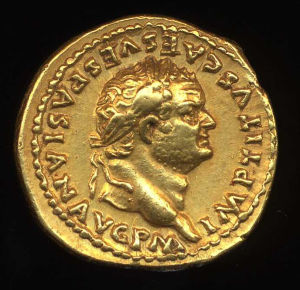 Member of the The Flavians dynasty.

Coins for this issuer were issued from 79 until 81.

Titus Flavius Vespasianus was born in AD 41 and grew up at the court. He was a popular, handsome, and talented youth, both intelligent and skilled at warfare. He was highly successful in Germany and Britain, and commanded one of his father’s legions in Judaea during the suppression of the Jewish revolt. He also saw the completion of the Flavian Amphitheatre, or Colosseum, during his reign.

Titus shared the consulship with his father and celebrated an immense triumph for the Jewish War. He grew somewhat cruel as commander of the Praetorian Guards and held riotous all-night parties, but enjoyed quiet dinner-parties with his closest friends. However, Titus was ultimately kind-hearted and attempted to meet all individual petitions favourably.

Titus’ reign, after his father’s death, saw two terrible disasters: the eruption of Vesuvius in 79 and the fire of Rome in 80. He spent much of his personal wealth to aid those afflicted by the disasters. His brother Domitian constantly plotted against Titus, who never directly ordered anyone killed and attacked the practice of informants. Titus died after contracting a fever in the countryside after complaining that he had only one sin on his conscience. He was mourned as an emperor with the best interests of his people at heart.

Suetonius describes Titus as muscular and handsome, though slightly paunchy.

We have recorded 170 examples.

Other resources about Titus

View all coins recorded by the scheme attributed to Titus.