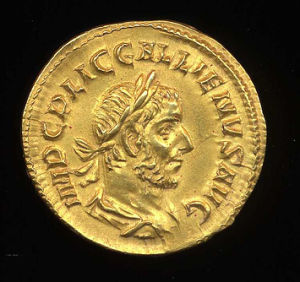 Publius Licinius Egnatius Gallienus was the son of Valerian, born in 213. He ruled with his father, commanding the armies in the West while his father took care of the East. Valerian was taken captive by the Persians, and thus Gallienus became sole emperor. He struggled to keep the empire together and introduced a policy of religious tolerance that lasted for decades. Over seven attempts were made to set up a rival emperor and a series of secessionists in Gaul made things difficult.

A major revolt by Postumus formed a northern ‘empire’ which lasted about 15 years. Gallienus was a good soldier but unable to cope with the many factions on all edges of the empire; he was killed by his men near Milan and buried on the Appian way. His legacy is undeservedly bad; he alienated the Senate by refusing to allow senators into the military, a policy which stemmed from the recent betrayals and succession issues caused in part by senators in the army.