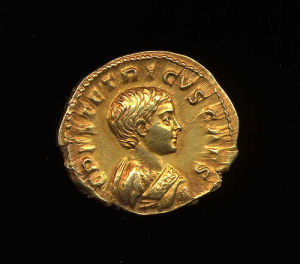 Member of the The Gallic Emperors dynasty.

Gaius Pius Esuvius Tetricus (who had the same name as his father) probably received the title Caesar in 273 from his father. He may have been promoted to Augustus near the end of his father’s reign, but the evidence is inconclusive. When Aurelian re-integrated the Gallic Empire back into the Roman, Tetricus II lived out his days in Rome.