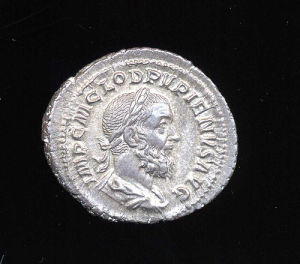 Marcus Clodius Pupienus Maximus was born in 164. He was elected, along with Balbinus, by the Senate as Emperor. The move was to oppose Maximinus in the north and make up for the untimely deaths of Gordian I and II. Balbinus and Pupienus were not popular with the people of Rome, who demanded a Gordian ruler; the two were forced to appoint the 13-year-old grandson of Gordian I as Caesar.

The joint emperors were successful in defeating Maximinus at Aquileia. When they got back to Rome, the two began to argue about who was the more important emperor. The Praetorian Guard never took to them, and in May of 168 killed them both. The Praetorians proclaimed Gordian III emperor.

Pupienus had a long, gaunt face and full beard.