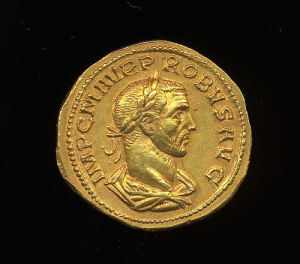 Marcus Aurelius Probus was born in 232. He was a highly accomplished military man, much like the emperor Aurelius. When Florian was betrayed by his own men, his rival Probus became emperor. Probus spent his most of his reign trying to consolidate the empire, generally by solidifying the borders which were increasingly attacked by Goths, Vandals, Germanic tribes, etc. In 280 he also had to deal with internal insurrections, when Bonosus and Proculus proclaimed themselves emperors at Cologne. British and Moorish governors also grabbed at power.

After celebrating a triumph for his German victories, Probus set out again for the east. In his absence Carus, the Praetorian Prefect, raised support and made a bid for power. Probus sent troops back to crush the movement, but these troops defected to the usurper. When Probus’ remaining troops heard of the defection, they murdered him in a look-out tower near Sirmium.