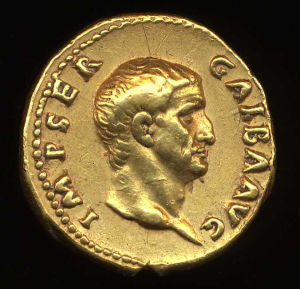 Member of the Civil-Wars dynasty.

Coins for this issuer were issued from 68 until 69.

Servius Sulpicius Galba was born in 3 BC and known through his younger days as Lucius Livius Ocella. He had two sons by his wife Lepida, but never remarried after her death. Livia Augusta showed Galba great favour during her life, and Gaius (Caligula) placed him as a commander in upper Germany. Upon Gaius’ murder, Galba had an opportunity to grab power, but demurred and grew to be a close friend of the emperor Claudius.

Galba’s achievements in Germany and as proconsul in Africa won him honor, but after appointments to three priesthoods he lived in semi-retirement through the middle of Nero’s reign. He then assumed a governorship in Spain for eight years, where he began to show signs of cruelty in extreme punishments for small crimes. He was hailed as imperator in Spain before the actual death of Nero, and as soon as he heard of Nero’s death he immediately took the name of Caesar and marched into Rome.

Galba aroused hatred with his greed and cruelty, particularly among the army. Fond of food and pleasure, he ate many times per day and punished his real and imagined enemies harshly. He died at the hands of cavalrymen-assassins as Otho made a bid for power.

Suetonius reports that Galba was of medium height with no hair, blue eyes, and a hooked nose. He was heavyset and gout disfigured much of his body.

We have recorded 65 examples.

Other resources about Galba

View all coins recorded by the scheme attributed to Galba.