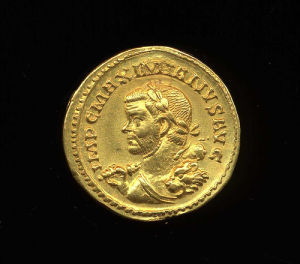 Maximian was born ca 250. He was adopted by Diocletian and made co-Augustus in 286; Maximian effectively ruled the western part of the empire while Diocletian dealt with problems in the north and east.

With Diocletian, Maximian restored the Forum in Rome and built a set of baths even bigger than Caracalla’s. He adopted Constantius as his son and successor when Diocletian adopted Maximian; he abdicated power with Diocletian in 305. However, Maximian did not take well to retirement. As a Senior Augustus, he continued to involve himself at times in affairs of the empire. He died at Marseilles in 310; he may have been murdered, or may have committed suicide.