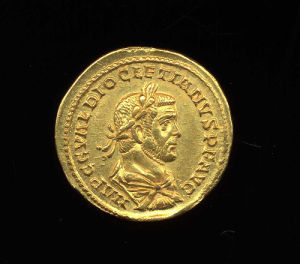 Gaius Aurelius Valerius Diocletianus was born ca. 245 in Dalmatia. He came from humble origins and rose through the military to serve as commander at Moesia. Diocletian may have played some part in the deaths of Carus and Numerian; his troops proclaimed him emperor and he marched against Carinus in Rome. Carinus met him in battle and was ultimately killed, and Diocletian gained the support of his troops.

In 285, Diocletian appointed his colleague Maximian as Caesar and gave him control of the Western provinces; the emperor had no sons on whom to rely. In 286 Maximian was raised to Augustus, and propaganda tended to identify Diocletian with Jove and Maximian with Hercules.

Diocletian spent five years campaigning against the Danube tribes and unsuccessfully dealing with the upstart Carausius. Although the dual emperor system worked well, he began to worry about the succession. As a solution, Diocletian and Maximian each appointed a junior Caesar to succeed when either of the Augusti died (Constantius and Galerius.)

Diocletians reorganization of the imperial system proved his greatest contribution to the Roman empire. The Senates influence was on the decline, and the empire was divided into more orderly provinces, with stricter rules about their governance. He is also remembered for reinstating worship of the traditional Roman pantheon and persecuting Christians.

Diocletian and Maximian gave up power in 205, and Diocletian retired to Split (in modern Croatia) where he died in 311.

We have recorded 268 examples.

Other resources about Diocletian

View all coins recorded by the scheme attributed to Diocletian.