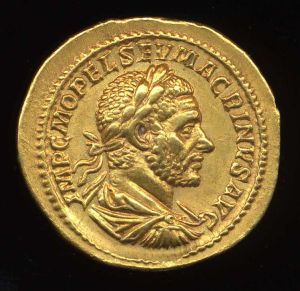 Member of the The Severans dynasty.

Marcus Opellius Macrinus was born in AD 164 in Mauretania. His Moorish features stood out, but moreso his humble origins—he was the first Roman emperor who was not a senator.

Plautianus, commander of the Praetorian Guard under Severus, appointed Macrinus his steward. In 212 Macrinus became Praetorian Prefect himself, and served under Caracalla in the east. It is unclear whether he aspired to become emperor, but after the assassination of Caracalla, no clear successor emerged. After three days, Macrinus sought the affirmation of the troops.

Macrinus soon fell out with Julia Domna, Severus’ widow. The troops also grew distrustful after Macrinus made a huge monetary settlement with the Parthians, which they viewed as disgraceful to Roman valour. He also began removing some of the troops’ privileges.

The soldiers shifted their allegiance to fourteen-year-old Varius Avitus (eventually Elagabalus), whom they believed to be an illegitimate son of Caracalla. Macrinus saw his power slipping and fled to Rome, but was captured and executed in Cappadocia.

We have recorded 18 examples.

Other resources about Macrinus

View all coins recorded by the scheme attributed to Macrinus.

Fatal error: Method Pas_View_Helper_DbPediaRulerRdf::__toString() must not throw an exception in /var/www/finds.org.uk/app/views/scripts/partials/numismatics/roman/emperor.phtml on line 0