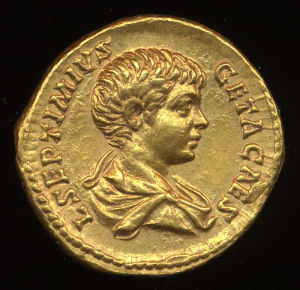 Member of the The Severans dynasty.

Publius Septimius Geta was born in 189, and quarrelled with his brother all through his youth. He never married and had no children.

Geta was only slightly younger than his brother Caracalla, but received honors such as the title Augustus much later than he. It is probable that Severus never meant Geta to succeed him, but the empress Julia Domna intervened and caused the two sons to be co-emperors upon the death of her husband. The dual reign lasted only ten months, as the emperors obstructed each other, built up rival factions, and plotted each other’s destruction.

Caracalla murdered Geta in February 212, and his supporters shortly thereafter. Geta is said to have died on his mother’s lap. Caracalla strove to eradicate Geta’s memory, by obliterating all portraits and memorials, and so historians know relatively little about this short-lived emperor. He is more fondly remembered in a few literary sources, probably because Geta sought the intellectuals for his faction against Caracalla.