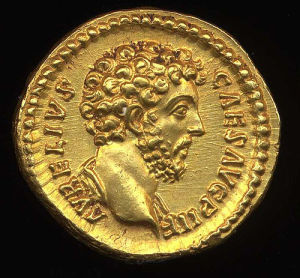 Member of the The Antonines dynasty.

Marcus Annius Verus was born in AD 121 and somehow caught the attention of the reigning emperor Hadrian. At age 18, he was adopted by Antoninus Pius along with Lucius Ceionius Commodus; he because deeply attached to his adoptive father.

Upon the death of Antoninus Pius, Marcus Aurelius had himself and Lucius Verus proclaimed co-emperors, although it seems to have been his father’s wish that only Marcus Aurelius fulfil that position. Marcus Aurelius may have thus elevated his adoptive brother because he wished to have more time for philosophy.

Soon after their accession, the dual Caesars faced the Parthian War and, immediately after, the Plague. Germanic invaders also attacked in the north. Verus suffered a stroke in 168, and Marcus Aurelius was left to rule alone. He had to deal with continued revolts in Germany, as well as an attempt by the governor of Syria to gain more power.

Faustina the Younger, wife of Marcus Aurelius, conspired against him with this governor of Syria (Cassius). However, soldiers loyal to the emperor killed Cassius and the ruler himself sought to avoid further conspiracy. At this point, Marcus Aurelius’ son Commodus joined him in the struggles on the Danube frontier.

The emperor died after several years of body pains and a possible dependence on opium. He was buried in Hadrian’s mausoleum and remembered as a good emperor who met with undue hardship.

We have recorded 400 examples.

Other resources about Marcus Aurelius (as Caesar)

View all coins recorded by the scheme attributed to Marcus Aurelius (as Caesar).