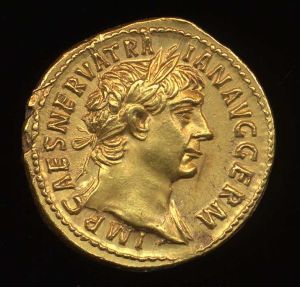 Member of the The Adoptive Emperors dynasty.

Coins for this issuer were issued from 98 until 117.

Marcus Ulpius Nerva Traianus (Caesar) was born in AD 53 and spent much of his early career in Syria, where his father was governor. He later served as governor of Germany under Nerva, who also adopted him. After Nerva’s death he entered Rome humbly, but soon began military campaigns.

Trajan treated his citizens well and was known for his affability. He exiled his enemies, but did not kill them, and engaged in public works and restored infrastructure. Trajan’s column still stands at the end of Trajan’s Forum in Rome; the emperor levelled that hilly region and constructed more public buildings.

Although a pederast and heavy drinker, Trajan was well-liked for his policies and government. Among other military endeavours, he conquered Armenia and won many honorific military titles. He died from complications of a possible stroke, though Trajan believed he had been poisoned. He was deified and his ashes placed at the foot of his column.