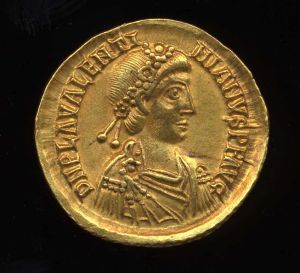 Member of the Fifth Century dynasty.

Placidius Valentinianus was the son of Constantius III and Galla Placidia. After Constantius II died, his widow quarrelled with Honorius and fled to Constantinople in 423. She returned with her son to Italy two years later, and when the usurper Johannes was put to death they travelled to Rome.

Valentinian III was proclaimed emperor at Rome in 425, and for the first 12 years of his reign Placidia took control. Control then passed to the general Aetius, who was assassinated in 454.

Valentinian’s reign saw the slow dissolution of the western empire, including the loss of Africa to the Vandals and Atilla’s invasion of Gaul.

Valentinian III was assassinated in 455 as the result of a plot instigated by the senator Petronius Maximus.

We have recorded 2 examples.

Other resources about Valentinian III

View all coins recorded by the scheme attributed to Valentinian III.