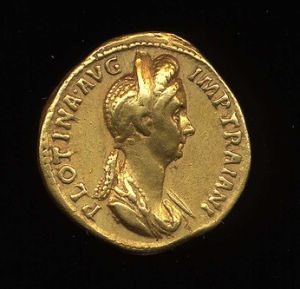 Member of the The Adoptive Emperors dynasty.

Pompeia Plotina was born in Gaul around AD 70. She married Trajan sometime before the death of Nerva, but had no children. She was a model empress, though she supposedly encouraged Hadrian to marry against Trajan’s niece against her husband’s wishes.

We have recorded 1 examples.

Other resources about Pompeia Plotina

View all coins recorded by the scheme attributed to Pompeia Plotina.

Fatal error: Method Pas_View_Helper_DbPediaRulerRdf::__toString() must not throw an exception in /var/www/finds.org.uk/app/views/scripts/partials/numismatics/roman/emperor.phtml on line 0