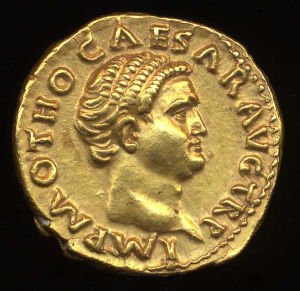 Member of the Civil-Wars dynasty.

Coins for this issuer were issued from 69 until .

Otho was born in AD 32 and led a reckless youth, eventually gaining the favour of Nero. As a confidant, he helped divert attention from Nero’s murder of his mother Agrippina, and enjoyed a close and possibly promiscuous relationship with Nero’s consort Poppaea Sabina. Exiled by Nero for his relations with Poppaea, Otho joined Galba against the emperor and ingratiated himself with as many potential allies as possible. Otho hatched a plan for capturing Galba, which led to the latter’s assassination.

Otho made a show of telling the Senate and armies that he would only accept any offers they saw fit to bestow upon him. His first act as Emperor was to finish Nero’s extravagant Golden House, and soon after his ascent the armies in Germany took an oath of loyalty to Vitellius. Otho plunged into war with them to cement his superiority, but he soon realized he was losing and decided to commit suicide. He was appreciated more after death than during life and even credited with killing Galba to preserve Rome, not from personal ambition.

Suetonius reports that Otho had an uninspiring appearance and kept his body completely hairless. He was of medium height and had bow-legs.

We have recorded 40 examples.

Other resources about Otho

View all coins recorded by the scheme attributed to Otho.