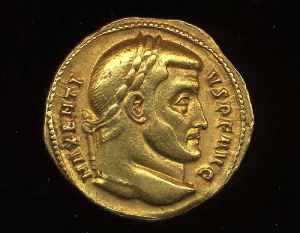 Maxentius was the son of Maximian and was angry that he had not been elevated to Caesar in 305. He took up residence just outside of Rome, and when Galerius decided to extend taxation to all of Italy he saw the opportunity to lead a revolt. He also allied with Constantine and called his father Maximian out of retirement.

Severus tried to march on Rome to retake it, but his troops deserted to Maximian and he was killed. The Galerius himself invaded Rome, but he too was unsuccessful in putting down Maxentius’ rebellion.

Maximian tried to usurp his son’s power in 310, but failed and fled to Constantine’s protection. After a conference of Diocletian, Galerius, and Maximian, the tetrarchy was re-affirmed and Maxentius was left in control of Italy and Africa. However, his popularity began to decline and he faced rebellions. In 312, Constantine finally marched on Rome under Christian banners, and Maxentius’ troops died when the Milvian Bridge collapsed as they were retreating back into Rome. Maxentius himself died while trying to swim to safety.

We have recorded 16 examples.

Other resources about Maxentius

View all coins recorded by the scheme attributed to Maxentius.