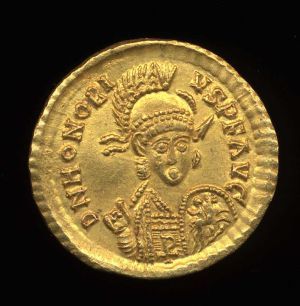 Member of the House of Theodosius dynasty.

Flavius Honorius was born in 384 to Theodosius I and Aelia Flacilla. He was made Augustus in 393; when Theodosius I died in 395, Honorius took control of the Western empire.

Honorius and his brother lacked their father’s ability, and Honorius’ guardian Stilicho ran the empire through him. Honorius married Stilicho’s daughter. During his reign, the empire was attacked repeatedly by various barbarian tribes; the Vandals overran Gaul and the Visigoths threatened Italy. Stilicho was executed in 408, and order fell apart. The Goths besieged Rome three times and sacked it in 410; in 412 they went back to Gaul and the general Constantius helped rebuild the western empire.

Honorius made Constantius an Augustus in 421, and died at Ravenna in 423 after thirty years of troubled and ineffective rule.

We have recorded 206 examples.

Other resources about Honorius (emperor)

View all coins recorded by the scheme attributed to Honorius (emperor).