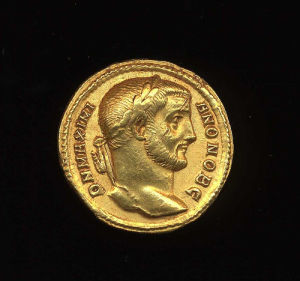 Gaius Galerius Valerius was born ca 250 near Serdica. He had a distinguished military career, and Diocletian nominated him as junior emperor in 293 (at which point Galerius divorced his wife and married Diocletian’s daughter Valeria). Galerius successfully ruled Egypt and supposedly incited Diocletian to persecute the Christians; he became Augustus in 305 when Diocletian abdicated.

As Augustus of the east, Galerius was theoretically subordinate to the Western emperor but managed to appoint two favourites, Maximinus and Valerius Severus, as the junior Caesars. Upon the death of Constantius, he grudgingly allowed Constantine to become Caesar, but insisted that Severus be Augustus.

Maxentius soon overthrew Severus, and Galerius invaded Italy but was forced to retreat. He summoned Diocletian and Maximian to meet him and declare Maxentius a usurper in 308; they appointed Licinus in his place. Galerius grew sick in 310 and feared the illness was retribution from the Christian god, so he reluctantly lifted some of his persecution. He died in 311.

We have recorded 174 examples.

Other resources about Galerius

View all coins recorded by the scheme attributed to Galerius.