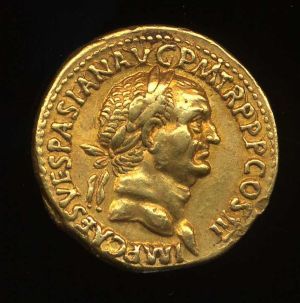 Member of the The Flavians dynasty.

Coins for this issuer were issued from 69 until 79.

Titus Flavius Vespasianus was born in AD 9 and grew up on his grandmother's estate. He entered politics rather late and at the urging of his mother; he survived the reign of Gaius by flattering the emperor and commanded a legion in Germany for Claudius. He lost Nero's favour by failing to appreciate the emperor's musical recitals but was appointed to deal with the province of Judaea, where civil discontent was turning into open rebellion.

Vespasian got news of the succession struggles in Rome as Galba, Otho, and Vitellius made their bids for power. He sent troops to Italy and himself went to Alexandria to take control of Italy's grain supply. As soon as he had word of Vitellius' demise, Vespasian went to Rome himself and set about restoring the city that had suffered at the hands of the warring would-be emperors.

A popular emperor who was later deified, Vespasian treated all classes well and reformed the Senatorial order. He was remembered as just and fair, a welcome change after Nero and his successors. He died after catching fever on a visit to Campania.

Suetonius reports that Vespasian had a strong and well-proportioned body but always wore a strained expression on his face.

Other resources about Vespasian

View all coins recorded by the scheme attributed to Vespasian.