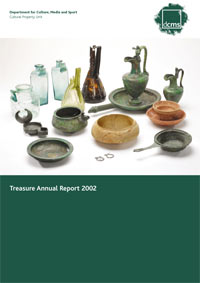 Full version of this report available in pdf format - 6.97 MB

This is the fifth Annual Report to Parliament on the operation of the Treasure Act 1996. Like its predecessors, it lists all the finds that were reported as potential treasure to the British Museum, the National Museums & Galleries of Wales and the Environment and Heritage Service, Northern Ireland. This Report contains details of 240 new cases reported during 2002. Of these cases, 104 new Treasure finds have been, or are being, acquired by museums across the country.

The number of finds being reported as Treasure is increasing rapidly and it is expected that the numbers will increase to around 500 by the end of 2004. This is largely due to the expansion of the Portable Antiquities Scheme in 2003, when 21 new Finds Liaison Officers (FLOs) were appointed across the country. Finds Liaison Officers play a crucial role in the effective operation of the Treasure Act, encouraging finders to report their finds and guiding them through the Treasure process.
As in previous years, I would like to acknowledge the role of finders and their prompt reporting of finds. Metal-detector users find the great majority of Treasure and without their active cooperation the Act would be ineffective.
It is a pleasure to acknowledge that there is an increasing tendency for Treasure finds to be
donated to Museums. This Report highlights nine cases where finders and landowners have
agreed to donate finds to the appropriate museum. I would like to pay tribute to the contribution that the staff of the British Museum, the National Museums & Galleries of Wales and the Ulster Museum have made to the Treasure process.
The Coroners’ Service has a central role in the Treasure system and we continue to appreciate the part played by Victor Round, H M Coroner for Worcestershire, and Secretary of the Coroners’ Society of England and Wales.

I am particularly grateful to the Treasure Valuation Committee and its panel of expert advisers for its work. Last year the Committee, which provides Ministers with independent advice on the valuation of Treasure finds that museums wish to acquire, dealt with 138 cases and many of those it considered more than once.

I am indebted to the Chairman of the Treasure Valuation Committee, Professor Norman Palmer, and to its members, Mr Thomas Curtis, Mr Dennis Jordan, Dr Arthur MacGregor, Dr Jack Ogden and Ms May Sinclair for the very careful consideration they have given to these and all the other cases that have come before them. Dennis Jordan, President of the National Council for Metal Detecting, retired from the Committee after six years’ service and I would like particularly to thank him for his contribution which has helped to bring about a sea-change in relations between my Department and the metal-detecting community. I am pleased to welcome in his place Trevor Austin, General Secretary of the National Council for Metal Detecting, who has also spent much time advising finders on Treasure cases.

Funding bodies play an essential role in supporting the acquisition of Treasure finds by museums, particularly the V&A/MLA Purchase Grant Fund, the Art Fund and the Heritage Lottery Fund. In last year’s Report I noted with concern that in twelve cases museums had expressed an interest in acquiring Treasure finds but had then been unable to pursue them because of difficulty in raising the money.

However, I am delighted that in January of this year the Trustees of the Sainsbury Family Charitable Trusts announced that the Headley Trust would establish a new fund, the Headley Museums Treasure Acquisition Scheme (www.headleytreasures.org.uk), to operate in conjunction with the V&A/MLA Purchase Grant Fund. The purpose of this is to enable regional museums to acquire Treasure and I understand that eight grants have been made in the first six months. This fund has been established on a trial basis for one year. I commend the Trustees of the Sainsbury Family Charitable Trusts for their initiative and I hope that they are able to continue with this fund.

Lastly, I would like to thank the 49 contributors for their entries in this Report as well as the editors, especially Anna Gannon. I think it important that these Annual Reports on Treasure, besides fulfilling the statutory obligation to report to Parliament each year on the operation of the Act, should also serve as a useful first publication of these finds.

ESTELLE MORRIS Minister of State for the Arts September 2004