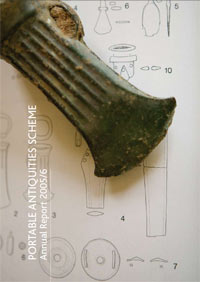 The main achievements of the Portable Antiquities Scheme (PAS) in the period 1 April 2005 until 31 March 2006 can be summarised as follows:

Extent of the Scheme

A network of 36 Finds Liaison Officers (FLOs) covers the whole of England and Wales. This is co-ordinated and supported by a central unit of a Head and Deputy Head, Resources Manager, Education Co-ordinator, ICT Adviser and six Finds Advisers. In 2005/6, 42 part-time Finds Liaison Assistants (FLAs) and 83 volunteers assisted the work of the Scheme.

In June 2006 an independent evaluation of the Scheme (PAS User Survey 2006 – see http://www.finds.org.uk/news/reviews/2006) carried out by Rachel Edwards (Arboretum Archaeological Consultancy) showed that 87 per cent of people thought the PAS was successful in advancing archaeological knowledge. With regards to its other aims (see page 9) the Scheme has achieved an approval rating that is between 6 and 16 per cent higher than was achieved in 2004. The PAS has been recommended as a model to follow in the Normand Review (2003) on Treasure Trove in Scotland and the Report of the DCMS Working Group on Salvage and Reporting, Protecting our Marine Historic Environment (2006). The British Marine Aggregate Producers Association Protocol for reporting finds of archaeological interest (2005) also draws on the experience of the PAS.

In 2006 a socio-economic analysis of postcode data shows that 47 per cent of people recording finds with the Scheme (since 1997) are from groups C2, D and E, which compares favourably to visitors to museums (31 per cent). 46 per cent of visitors to a series of Fabulous Finds Days, held nationwide to launch Museums & Galleries Month in April 2005, had never previously been to that museum before. Liaison: The FLOs have liaised with 5,855 finders, attended at least 697 metal-detecting club meetings and 877 other meetings. They maintain regular contact with both metal-detecting clubs and amateur archaeological groups. Treasure Hunting produced 15,000 copies of a 32 page ‘round-up’ of finds recorded through PAS, which reached a wider audience than the PAS normally reaches with its own publications. The Searcher organised an annual competition – ‘The Nation’s Greatest Detecting Finds’ – which promoted finds recording with the PAS.

There have been over 53 million user hits on the Scheme’s website – www.finds.org.uk – in the period of this report; a 148 per cent increase on 2004-5. At the end of this reporting period the online database allows public access to 129,613 records and 93,337 images.

A further 57,556 archaeological objects have been recorded on the PAS finds database in 2005/6, some of which are illustrated in this report; double that of 2003/4. Of these, just over 68 per cent have been discovered whilst out using a metal detector; the rest have been found by other means. This report also shows that since 2003, when the PAS was expanded to the whole of England and Wales, there has been an average 154 per cent increase in the reporting of potential Treasure finds.

More than 90 per cent of finds recorded have been recovered from cultivated land, where they are susceptible to plough damage and artificial and natural corrosion processes. Nearly 86 per cent of finds are now being recorded to the nearest 100m2 (a six-figure National Grid Reference) or better, and almost 40 per cent of all finds are being recorded to the nearest 10m2 (an eight-figure National Grid Reference). Finds data: The finds data generated by the PAS is made available to Historic Environment Records (HERs) - the key record holders for information about the historic environment - and is published on the Scheme’s website – www.finds.org.uk. A protocol has been agreed on the transfer of PAS data to HERs, which – in the first year of this agreement – 48 HERs (over half) have now signed.

Many important new archaeological sites have been discovered as a result of the finds recorded by the FLOs. These include a new Roman kiln site in Leicestershire, a previously unknown Anglo-Saxon cemetery in Norfolk and a nineteenth-century gunflint production site in Suffolk.