Last weekend the PAS held a very successful Finds Identification event as part of a weekend of special activities around the Buried Treasure exhibition at the BM.

Over 80 objects were recorded from across the whole of England and Wales and gold coins from the sponsors, Anglo-American, were awarded to the `star' finds. 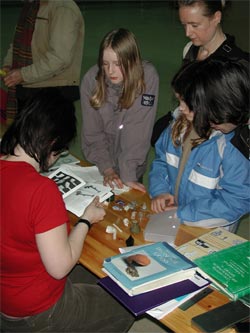 These were: a medieval gilded copper-alloy prick spur found by Mrs S Lloyd in The Gower, South Wales.
A beautiful early Neolithic handaxe found Paddockhurst in Sussex in 1921 and brought in by Mrs Elliott, the daughter of the original finder.

And  an Anglo-Saxon silver penny of king Athelstan found near Lewes by Mr D Page.

The event featured prominently on BBC news at 5pm on Saturday 14th, demonstrating the success of the day.