Is this the Viking find of the century?

The discovery of a hoard of treasure in Yorkshire is set to lead to the excavation of what might be a Viking boat burial - which would make it the first to be discovered in England and one of the most significant Viking finds in the British Isles.

The hoard of weapons and personal items has been found by metal detectorists and has gone on display for the first time at the Yorkshire Museum, York, during the city's Viking Festival. The fascinating collection of items dates from the late 9th Century AD, and includes silver coins, fragments of two swords, weights, a belt buckle, strap ends and boat nails. It will be on display in York until the end of February. 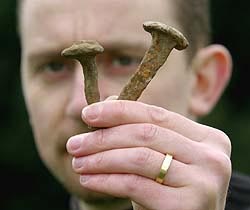 Experts believe it might have come from a Viking boat burial - a ceremony where people were buried in a boat with a group of possessions to take with them to the after-life.

Archaeologist Simon Holmes, finds liaison officer for the Portable Antiquities Scheme at the Yorkshire Museum, identified the items and said a full archaeological excavation of the area where they were found would determine whether they had come from a boat burial. He said: "If this is indeed the case, it will be the first Viking boat burial discovered in England and therefore one of the most important Viking discoveries ever made in the British Isles.

"This find is extremely significant and will increase our understanding of what the Vikings were doing here in Yorkshire in the late 9th Century." 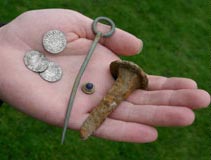 The metal detectorists, who wish to remain anonymous, contacted Mr Holmes through the national Portable Antiquities Scheme, which is a voluntary recording scheme for archaeological objects found by members of the public and which has its Yorkshire base at the Yorkshire Museum. It is funded by the Heritage Lottery Fund.

They made their discovery in December 2003 and reported it in January 2004.

After going on show at the Yorkshire Museum, the items will go to the British Museum for further study. Because the hoard contains some silver, it qualifies as "treasure" under the Treasure Act 1996.

Photos are used by permission of Kippa Matthews, YMT.