During the early 15th and early 16th centuries the English economy experienced so serious a shortage of English-struck halfpennies that people began using foreign coinage to fill the gap. The coin they used was the Venetian soldino.

The Venetians were notorious traders in the late medieval period with trade networks covering the Mediterranean and Europe. The Venetian fleet of galleys set out for England during May and stayed there until late August or early September, During these summer months soldini entered the English economy through trade with Venetian merchants and quickly became widespread across England. The soldino, meaning ‘little shilling’ became nicknamed the ‘galyhalpens’, or Galley-halfpence, after the ‘Galley-men’ who imported them. While the general population was enjoying these new exotic coins, the government was grappling with two major problems. The first was that the soldino was an illegally imported coin, and the second was that it weighed slightly less than an English halfpenny but mimicked it nonetheless. Soldini therefore became a particular source of irritation for the English government. During the early 15th century port-officials were charged with confiscating any soldini they came across and were later given the powers to forcibly search the galleys. Contemporary documents show large quantities of soldini being seized at London, Dover and Southampton. By the 1420s the English government eventually persuaded the Venetian senate to forbid the export of soldini, which effectively stemmed the flow of the coins into England. This success was short lived however, as large quantities of coins were imported once more by Venetian merchants in the early 16th century.

Venetian soldini span the period c.1382-1526. The dates of these coins show that the majority entered England in two substantial incursions: the first 1400- c.1415 under Doge Michele Steno, and the second c.1501-21 under Doge Leonardo Loredan. Table 1 provides a list of the Doges in office during the main period of circulation in England and the number of coins that can be attributed to them recorded on the PAS database.

There are three main types of soldino, termed here for simplicities sake as Type 1, 2 and 3. The designs on the coins will tell you which of the three types it is and consequently which date and doges it could be. Coins of type 1 arrived in England during first incursion (c.1400-1423) and coins of type 2 and 3 came arrived in England during the second incursion (c.1501-1525). 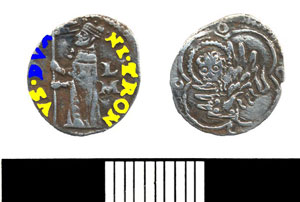 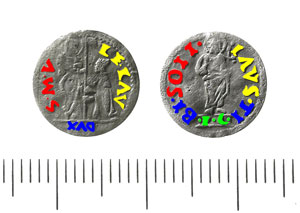 We have recorded 667 examples.

Search the database for all examples created by

This will possibly highlight a lot of mistakes in data entry.