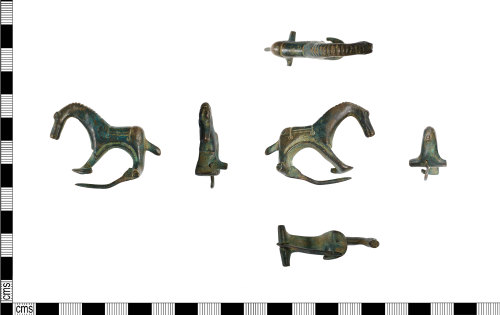 A complete, cast, copper-alloy, Roman brooch in the form of a three-dimensional horse, c.AD 43-410

This object is a hinged zoomorphic bow brooch with its copper-alloy pin still in-tact. The horse is realistically portrayed with a lowered head, an arched neck, a sub-rectangular body and a short, stubby rectangular tail protruding from the rump. While it does not have legs or hooves, below the head and chest of the beast, a forward sub-rectangular projection terminates with a curled upward lip and carries a small circular hole for the pin rest. Below the horse's rump and tail, the surface flares to a rectangular shape and cylindrical wings, still with the axis pin in-tact and the copper-alloy pin. The pin has an ovate head that tapers into a shaft with a blunted point.

The horse's head is fairly realistically rendered with a pair of eyes consisting of a circular groove and a raised annulet, two rounded ears with rounded recesses, a long muzzle, but lacks the distinctive chin groove and broad jowl. At the end of the muzzle are two circular indentations for nostrils and a transverse groove for lips that run halfway along the muzzle on both sides. No bridle fittings are represented. The mane is delineated with 14 short, regular transverse grooves, while a saddle or saddle blanket is depicted through linear grooves running transversely over the back of the horse, each terminating in a double longitudinal line and circular grooved motif in each corner, The double longitudinal line might represent the fringe of the saddle blanket and the circular motif at each corner perhaps a pompon. Within the groove which runs from front to back leg and, to a lesser degree, are turquoise-blue traces that hint at a lost enamel inlay. A curved groove follows the semi-circular arch along the horse's belly. On the reverse, on one side of the pin, there are four ring and dot motifs in a longitudinal row. No other decoration is visible on the front or reverse of the object. Brownish-grey hue with patches of blue patina on the neck and the back of the horse and saddle grooves.

It is not unusual to find horse iconography in Roman brooch art. Plate brooches, for instance, carry a single horse or horse-and-rider (e.g. LVPL-0867F4, PUBLIC-9E6B59, WILT-308FE7, SF-D19B27, LVPL-2092E5). This is the first 3-dimension horse brooch recorded on the PAS database. This object joins the gradually increasing repertoire of three-dimensional Roman zoomorphic brooches recorded on the PAS database. Other types of creatures include a unique hare brooch from Navenby, Lincolnshire (PAS no. LIN-9BB6F4), cockerels (WREX-F20705) and birds (BERK-5D8274), sea-creatures, hippocampus or hippocamph (Mackreth 2011 v2, plate 127, p.130, no.7968; vol 1 p. 185 part 5.b). There are, however, no direct stylistic parallels for LIN-09AF6A recorded on the PAS database.

While Hattatt's 2000 corpus of Roman brooches offers no parallel, Mackreth reports at least one, moulded horse brooch (Mackreth 2011,Vol.1 p.185, 7.1). This example, in Mackreth, of a modelled horse is catalogued as an 'Atelier A' with the defining feature as circular spots of enamel. He reports that 'animals are often placed on a bar representing the surface of the ground and may have collars around the neck if these are domesticated'. Other animals in this group include a lion from Richborough (no. 8120) which was dated to the 3rd-4th century AD (Mackreth 2011,v1, p.185, part 7.1). The 'Atelier' examples belong to a Continental group of brooches identified by Feugère as 'Atelier A' Type 29a, (10a), a hinged zoomorphic brooch. While Mackreth gives a broad 3rd-4th century date for the British examples, the Continental ones are dated to the end of 1st century to the beginning of 2nd century (Feugere  1985, p.387, p.394). This type of horse brooch is incredibly rare in Britain. The only recorded example found in Britain is housed at the British Museum and is broadly dated as 'Romano-British' c.AD43-410 and it is typed as a Hull Plate brooch T205, the provenance is unknown (BM acc. no. 1872,0520.8).

Continental examples and 1872,0520.8 are also decorated with circular, punctuated enamel which defines the Type 29a, 10a 'Atelier A' group, but LIN-09AF6A does not appear to have this design.  LIN-09AF6A more closely aligns with other three-dimensional hinged horse brooches that are unfortunately not provenance or recorded and are mainly listed on auction sites. As noted in Brundle et al (2021), 'one such brooch is documented as a metal-detected find from Pontefract, W. Yorks, according to the Artefacts entry (FIB-4646) for this brooch type. The same Artefacts entry also notes two examples from archaeological contexts. The first, very stylized, is from a late Republican or Augustan context from the Alpine sanctuary of Minerva at Breno, provincia di Brescia, west of Lake Garda (Bonini 2010, 359-60, no. 6). The second, similar in size but differing in most details is documented from a 2nd-century grave at Resnik on the Croatian coast (Kamenjarin 2011, 62). The many unprovenanced examples are quite diverse'.

The frequency of this type of horse brooch indicates the need for a new designated group type, proposed here as 'Leasingham' type. This is the first – recorded – horse brooch of its kind in Britain which has been preserved by record for the public and it is hoped that it will be acquired by The Collection Museum, Lincoln.

Bayley, J. and Butcher, S. 2004. Roman Brooches in Britain: A Technological and Typological Study based on the Richborough Collection, London, The Society of Antiquaries of London.

Find number: ESS-AAE8CC
Object type: BROOCH
Broadperiod: ROMAN
An incomplete Roman copper alloy zoomorphic brooch in the form of a sea serpent, dating to the 2nd century AD. The object is in the shape of …
Workflow: Published