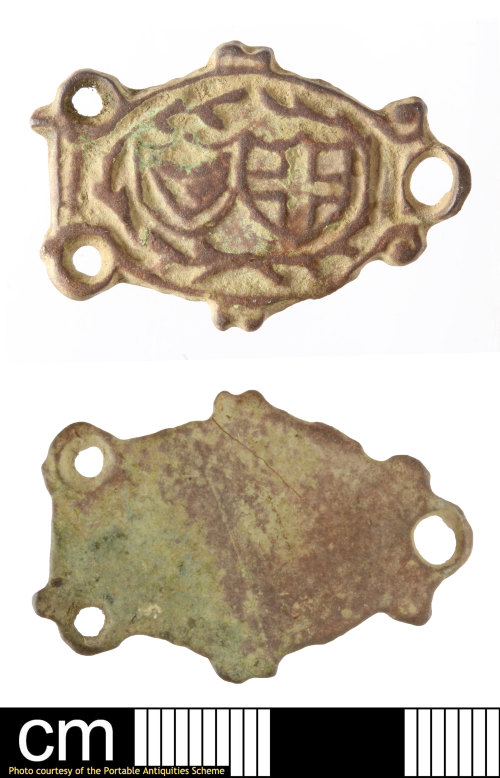 An incomplete Post-medieval, cast, copper-alloy, one-piece, moulded-relief dress fastener with the arms of the Commonwealth, dating to AD 1647 - 1660.

The piece is the eye section of a hook-and-eye fastener and consists of an oval plate with three rounded attachment knops and a bifurcate ornamental knop on each side. Two of these knops are at its base, flanking what would have been an integral sub-rectangular attachment loop which is now broken and only indicated by a projecting stump; these knops are c6mm in diameter with central piercings c2.5mm in diameter. The final knop is placed centrally at the opposite end and is slighly larger, being c6.5mm in diameter with a piercing of c3.5mm diameter, and flanked by two rounded knops with raised spiral (scroll) decoration continuing the raised border. The bifurcating knops that expand from the centre of each longer side of the fastener are also scrolled.

The front of the plate is decorated in low relief with a central recessed oval field containing the two raised shields side by side of the Commonwealth, the left shield depicting an Irish harp, the right St. George's cross. These shields are contained within a raised wreath border. The reverse of the fastener is plain.

Similar artefacts can be seen in Read (2008: 175-177), of which no. 674 is almost identical (and also found in Somerset). (See also SOM-7C87C7 which is also almost identical.) Read (ibid) classifies these as his Class A, type 8. Webley (2018) has studied this group of blunt hooked fasteners with Commonwealth arms: re-affirming the South Western bias in their distribution, he suggests it may relate to the extent of conflict and divergent loyalties and opinions in the area during the Civil War.