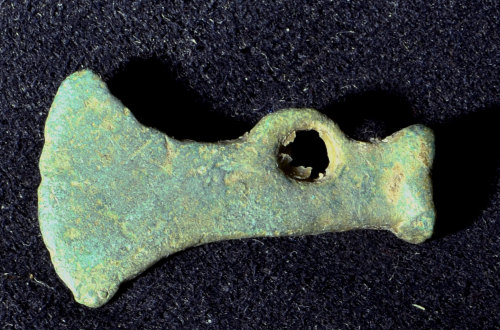 The axe is in the shape of a Late Bronze Age socketed axe, with a moulded socket collar, a wide body and widely splayed blade. The blade is asymmetric. At the top of the axe head, towards the socket, is a projecting circular loop that may be a suspension ring. Preserved in fair condition despite being somewhat encrusted, the axehead  measures 23.87mm in length, 6.91mm wide at the socket by 3.60mm thick, 5.86mm wide by 1.90mm thick at its midpoint and 13.88mm wide where the blade splays out to its widest point. It weighs 2.2g.

According to record SF-07E34B on this database “Miniature socketed axes such as this example are unique to Britain, being found in mainly Roman contexts. However, a smattering of examples discovered within securely Iron Age deposits suggests they have an early origin and may have been retained as 'heirloom' amuletic items. Study by Robinson and Farley (1995, 2011) has found that they are frequently discovered in association with temple/shrine sites and rural religious locales.”

Similar miniature objects can be found at YORYM-7DA2C1 and NCL-346DE5 on this database.

Broad period: IRON AGE
Subperiod from: Middle
Period from: IRON AGE
Period to: ROMAN
Date from: Circa 200 BC
Date to: Circa AD 100

Find number: YORYM-C70664
Object type: AXEHEAD
Broadperiod: UNKNOWN
A complete iron axehead of uncertain date. The axehead is of the bearded type being sub-rectangular in plan with an expanded blade with a pro…
Workflow: Awaiting validation

Recording Institution: DUR
Created: 2 years ago
Updated: About one year ago