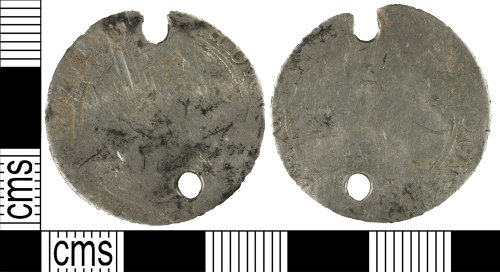 One silver twice pierced groat of possibly Edward VI (AD c. 1547-1553), dating to the first period 1547-9. The coin is extremely worn rendering the obverse and reverse unclear. The obverse legend reads EDW[-------]. The reverse depicts a long cross with a fragment of shield in one quadrant; the reverse legend reads POSVI DEVM [ADIVTOR MEVM]. The coin has been pierced twice, once at 1 o’clock and another at 7o’clock. The piercing at 1 o’clock has bro Mint of London. North Vol II, p121 n.1897.

The double piercing of this coin may indicate it had a secondary function, such as an item of jewellery or clothing. However, pierced coins have also been found in hoards, thus suggesting that such objects could re-enter circulation and coins. The nature of the piercing of this coin (one at the top and bottom) may indicate intentional modification for a secondary function and thus removal from circulation (PAS website- Altered Coins as Treasure).

In terms of age and as the object contains a minimum of 10% precious metal it qualifies as Treasure under the stipulations of the Treasure Act 1996.

Recording Institution: YORYM
Created: 2 years ago
Updated: About one year ago