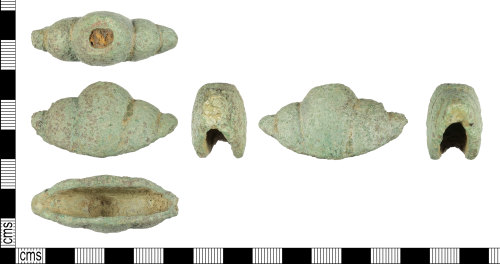 The pommel is broadly triangular in shape and has a hollow interior. The base curves upwards towards the outer edges. The pommel is divided into five lobes, increasing in size from the edges to the centre, each separated from its neighbour by a groove. The central lobe has an oval shaped aperture, through which the tang of the sword would have passed. There is still remains of iron residue inside the aperture. The pommel has a light green patina, and has several areas of pitting.

This form is considered to be of English origin (Davidson 1962, 55-6), but is called "Viking" and "of late Viking style" by Oakeshott (1991, 78 and 81). Late early-medieval pommels (Anglo-Saxon and Anglo-Scandinavian) were last thoroughly studied by Petersen in 1919. This example is of Petersen's Type S, a fusion of Anglo-Scandinavian and Anglo-Saxon fashions, and dates to the 10th or 11th century.