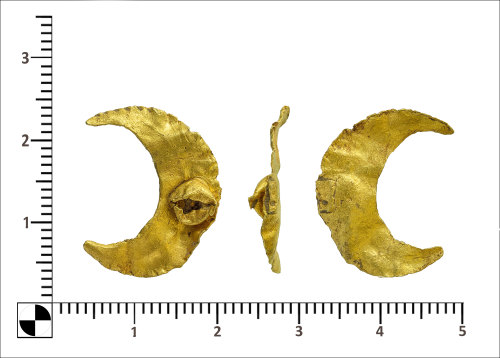 Gold lunate object, either a pendant or possibly an ear-ring. The object is made of thin sheet metal and rather crudely shaped, although it has suffered a fair degree of post-depositional damage. There is a slight central ridge that runs across the piece. The lower edge is decorated with a series of dog-tooth incisions, rather unevenly spaced. In the centre of the lower side is a circular box setting for a stone or glass gem, now absent; the sides of the setting have been squashed inwards. Inside the setting are the remains of a possible fixing substance. Traces of an attachment loop, now broken, are visible on the reverse.

Note: this item is more than 300 years old and composed of more than 10% precious metal so qualifies as treasure as stipulated in the Treasure Act 1996.

Subsequent action after recording: Submitted for consideration as Treasure

Find number: ESS-CD46A6
Object type: EAR RING
Broadperiod: ROMAN
A Roman gold earring. The earring is made of round gold wire up to 1.25mm thick that has been formed into a complete loop. It is decorated w…
Workflow: Awaiting validation