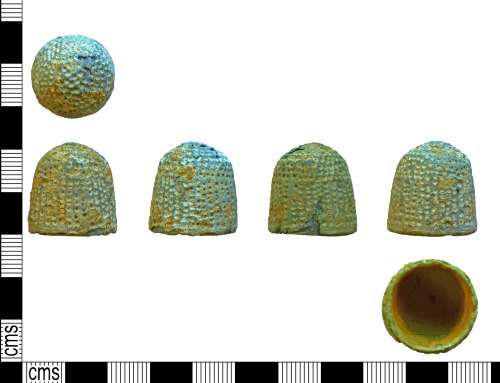 A complete copper-alloy Thimble of Medieval date (AD 1300-1500). The object has a circular base with fairly parallel sides which curve towards the top where they form the crown, creating a dome. A series of irregular spiralling pits extend from the crown towards the base where they terminate with no indication of a border.

The metal has a light green slightly pitted patina.

Thimbles have been in common use in England from the 14th century onwards and Geoff Egan (2010, p.265) states that no Medieval thimble indisputably dating from before the 14th century has been found in England. They were originally used to protect the finger used to push a needle through sewing material and were commonly used by dressmakers and tailors. From the circa 16th century onwards silver thimbles were regarded as an ideal gift for ladies and have become gifts and collector's items made of a variety of materials including base and precious metals, and china. The pits on the surface of thimbles were originally created by the technique of hand punching, though in the mid-18th century they were machine-made.

Find number: YORYM-E59D79
Object type: THIMBLE
Broadperiod: MEDIEVAL
A complete copper alloy thimble of medieval date. The thimble has a circular base from which the sides taper inwards and curve towards the to…
Workflow: Awaiting validation