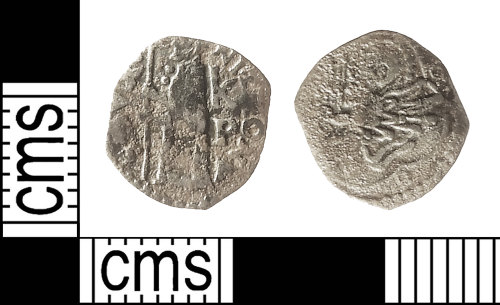 Reverse: No legend; Winged and nimbate lion of St Mark facing within a quadrilobe and holding a book of gospels.

Daubney (2010:187-190) writes "The first incursion c.1400-15: Numismatic evidence supports the earliest documentary evidence for the arrival of Venetian coins in any great quantity, both agreeing the event for the year 1400. In June of that year a number of vessels from the annual trade fleet docked in London and its merchants began extensively trading with soldini. This caught the attention of the Council at Westminster who quickly took advice from King Henry IV. The king took immediate action and instructed the Council to bring the laws against the circulation of foreign coins into force.
The sheriffs of London, Sandwich and Dover were empowered and charged with the task of seizing any soldini they came across, an order which was repeated in June 1401.9 The activities of the sheriffs did not remedy the problem immediately, however. Almost every year between 1400 and 1420 the sheriffs of London and Sandwich rendered account to the Exchequer of small parcels of galyhalpens which they had seized.10 The totals for each year are shown in Table 3, which reveals that the problem continued during the entire reign of Doge Steno, reaching its highest levels between 1402 and 1404 and tailing off sharply after 1415. This compares favourably with the numismatic evidence recorded on the PAS database, which records fifty-one coins for Doge Steno and just three for the subsequent doge issuing after 1413. Any soldini still in circulation after this date would have been removed during the major re-coinage of silver in England between 1464-66.11 At the time of his 1963 paper Spufford remarked that it was not known whether the returns reflect the number of coins imported each summer or the vigilance of the sheriffs, but the dramatic reduction in coinage after 1413 noted in Table 1 supports the former conclusion.
The cessation in the circulation of soldini resulted from the mounting pressure applied by the government to both Venetian merchants and the Venetian Senate itself. On 28 June 1408 the government sent a writ directly to the masters of two Venetian galleys ordering them not to trade their coinage in any way.12 This was supported in 1414 by a directive sent to the mayor and the searcher of the port of London empowering them forcibly to search the galleys,13 and finally in 1416 the decisive action came when the English government persuaded the Venetian Senate to forbid the export of their coinage to London.14 These measures proved effective, for only nine soldini were seized at Sandwich between 1415 and 1420; none were seized at London after 1415.15
Spufford also remarked that the actions of the Government seemed at odds to the relatively small quantity of coinage seized at London, Sandwich and Dover.16 He concluded that either the scale of import was much greater than the evidence would lead one to suppose, or that coinage was so touchy a subject that any infringement of the currency laws was an irritant out of all proportion to its magnitude.17 The systematic recording of casual losses by the PAS confirms that the import was indeed far greater than the evidence recorded by the sheriffs.
The distribution of Venetian soldini in England during the first incursion under Doge Steno shows they became widespread across central England, though rare north of the Humber and absent in the south-west (Fig. 1).
Concentrations of coins are noted along the south coast which presumably had both London and Sandwich as their source. Further concentrations deriving from London are noted along the Essex and Suffolk coastline, and in the West Midlands, where the coins of Steno form an arc extending from the Thames up through Northamptonshire, Warwickshire and terminating in Staffordshire. Relatively few coins are known from the East Midlands.
The similar wide distribution seen in the coins of Doge Venier, issued prior to Steno, indi- cates they arrived as old issues circulating with the latest coins of Steno in the opening years of the fifteenth century. This is also confirmed by the evidence from the Highbury Hoard, London, deposited c.1415-20, which contained over 7000 coins including at least one of Doge Contarini, five of Doge Venier and six of Doge Steno. The four coins of Doge Mocenigo (1413-23), issued immediately after Steno, compliment the records from the Exchequer series of enrolled Foreign Accounts, which record seizures of coins as late as 1415 in London and 1420 in Sandwich (Table 3). Venetian galleys docked at London and Sandwich during the first incursion, and the seizure returns provided by the mayor and the sheriffs confirm that soldini were circulating in large quantities at these ports (Table 2).18
English halfpennies of Edward III and Richard II were common across southern, central and eastern England, uncommon north of the Humber and rare in the west of England. Very few halfpennies were issued during the reign of Henry IV, and those of this period recorded by the PAS share a similar distribution with the earlier halfpennies but on a sparser basis (Fig. 2). The soldini of Steno share a similar distribution to these coins but with a tendency to fill the areas of absence seen in the plot of Henry IV coins where halfpennies previously circulated, notably along the 'arc' from London to the West Midlands, and in North Lincolnshire, and parts of Norfolk."

Daubney A. (2010) The Circulation and Prohibition of Venetian Soldini in Late Medieval England. The British Numismatic Journal 79.