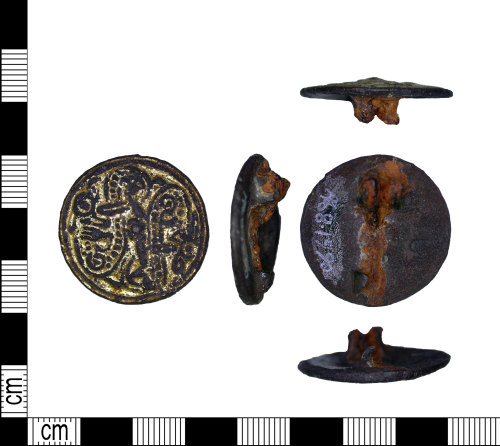 The brooch is circular in form and sub rectangular in cross section. It has a slightly dished surface and is decorated with an outer raised border, 2mm wide, which has a gilded linear recess in its centre. Inside this are two opposing 'S' shaped Jellinge-style animals arranged around a slight central boss, 2mm in diameter. Each beast is a sub figure of 8 shape. Each head is very slightly different, but it appears to have a gaping mouth with a jaw placed either side of a large circular eye sitting in a raised circle forming the head. It has a short 'tendril' running from the top of its head. It appears to be eating its own tail, with its back curving from behind its head, turning on itself with a raised circle forming its hip in the curve, then running under its head and slightly upwards, before turning down and round to point upwards into its mouth. The centre of the circle this forms has a hind leg emerging from it and pointing to the back of the beast and the central boss suggesting it is gripping or standing on that? On one beast just behind the head, is a possible hand, or the foot of the other beast's hind leg, with three short lines emerging above a single one, this appears to be gripping the beasts neck. the bodies are decorated with a series of raised dots and all the recesses areas are heavily gilded.

The reverse has two semi-circular lugs, 5mm high and 4mm wide, set 7mm apart, and 5mm from the edge. These have small circular holes in them and are still filled with iron. the pin, 2mm in diameter, is partially present, running down the centre of the brooch between the lugs for 10mm. At the opposite side, set 3mm from the edge, and aligned with the lugs is a sub triangular catch-plate 4mm long and 3mm high, with a slightly curved upper edge.

The object was found in 1987 and has been recorded now because of its rarity. The accession number visible on the reverse was (incorrectly) added when it was on long term loan to Jewry Wall Museum, Leicester. It is now on display as a long term loan to the Melton Carnegie Museum, Melton Mowbray.

This is a find of note and has been designated: Regional importance