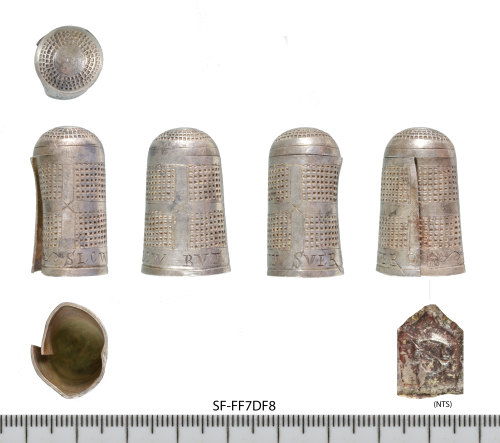 Description: A complete but slightly distorted silver thimble dating to the Post-Medieval period, c. 1600-1700. The thimble is of two piece construction, consisting a sheet metal base/wall soldered together at one edge and a separate domed crown soldered to the top of the sides. The latter have split down their original joining point, though the thimble remains intact despite this.

The base of the thimble is sub-oval in plan due to distortion, the walls decorated with eight rectangular panels, each separated by a thin band that create a cruciform motif quartering each pair of four panels. Each panel is made up from c. 6 rows of around ten rectangular stamped dimples, while the centre of each cruciform motif demonstrates an incised saltire. At the base of the wall is a plain band with a grooved recess at its lower edge, demonstrating the engraved inscription 'SLOW BVT SVER' followed by a tendrilled foliate motif. Stamped partially over the latter is a maker's mark consisting the letter 'O' set within a pentagonal cartouche. A further plain band is visible at the apex of the wall where it joins with the crown, the two elements divided further by a single incised line. Decoration on the crown itself largely mirrors that on the walls, consisting four courses of stamped rectangular dimples identical to those on the sides of the object. The apex of the crown is plain (tonsured) except for a central circular dimple and some scratches which may relate to use.

Discussion: A number of very similar silver thimbles demonstrating inscriptions or 'posies' have been recorded on the PAS database/processed under the Treasure Act. These include: SF-9F9DA1, ESS-723482 and LON-6F9633. So-called 'posies' on thimbles generally fall into three categories: 1) expressions of love or affection in a similar manner to 'posy' type rings, 2) expressions regarding industry or work the thimble itself might undertake, 3) religious passages or statements. This example clearly falls into the second of these. Thimbles of this form are typically dated to the first three quarters of the 17th century (McConnell 1999, 24) and appear to be of English manufacture.

The object contains more than 10% precious metal and is over 300 years old. Consequently, it qualifies as Treasure under the stipulations of the Treasure Act 1996 in terms of both age and precious metal content.

This is a find of note and has been designated: Include in PostMedArch