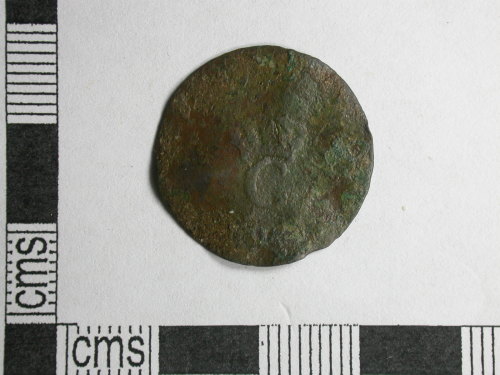 Copper 24 deniers or double sols of Louis XV (1715-1774) of France referred to as a French colonial 'stampee', used in the West Indies, with a large crowned 'C' stamped on the obverse, but a blank reverse. The first coinage of stampees used worn, old coins. This second major coinage employed newly minted planchets, thus the coin is not a 'reformation' nor a traditional counterstamp. In 1763 the first stampee, or sol tampé, of 24 deniers was authorized. This was a small copper disk stamped on the obverse with a crowned C (for Colonies) and a blank reverse. From dates on the undertypes we know these coins were produced through to at least 1764. They circulated widely and were also used in the British Caribbean colonies where the stampee were known as Black Doggs or Doggs as they were linked to the rum trade.