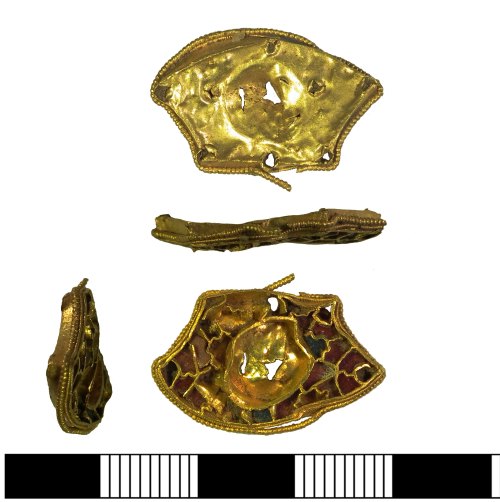 A gold cloisonné insert probably from the tongue of an early Anglo-Saxon buckle. The item is pelta-shaped and comprises a panel of gold, garnet and glass cloisonné cellwork, containing around thirty settings/inlays. It is formed from a gold sheet base plate, to which has been soldered a network of cells made from upright strips of gold sheet. This cellwork includes a large central setting around 8.2mm wide, now empty. The surrounding cells are of various shapes, with 12 red inlays (probably garnets) and three blue glass inlays surviving. The surviving garnet inlays sit upon waffled backing foils.

The edges of the object are bounded with a two fine strands of gold beaded wire, the lower and thicker of which is 0.7mm in width. The reverse of the object is undecorated and demonstrates six small holes around the periphery with another two either side of the central setting. These presumably served as attachment points.

The central setting itself is damaged with holes and tears in the gold which look to have been pushed through from the back; the object is also distorted with many of the cells having ruptured and the stones having been subsequently lost. The beaded wire border has become partially detached in two places.

Based on its form and technique, this artefact is likely to be the cloisonné insert from a particular type of early medieval buckle tongue with a mushroom-shaped base. These buckle tongues are typically attached to buckles with large triangular plates, categorised as Marzinzik's Type II.23b-ii (Marzinzik 2003, p. 50) and Hines and Bayliss' Type BU3-c (Hines and Bayliss 2013, p. 140). Most have composite decoration incorporating cloisonné and filigree motifs frequently in Salin's Style II. Their main area of distribution is south-eastern England, particularly Kent, where they are found primarily in burial contexts. The cloisonné tongue bases often combine garnets with white shell or blue/green glass, as in this case. Examples are known from Ash, Kent (British Museum, 1862,0701.10), Wickhambreaux, Kent (British Museum, 1905,0418.14), Alton, Hampshire (Curtis Museum; Evison 1988, p. 45) and the Taplow and Broomfield 'princely' burials (British Museum, 1883,1214.1 and 1894,1216.1 respectively). A recent find of a more complete example was found at Farleigh Wallop, Hampshire (Treasure Number 2018 T425, PAS Database SUR-920F4E).

The item comprises more than 10% precious metal and is over 300 years old. As such it qualifies as potential Treasure under the stipulations of the Treasure Act 1996.