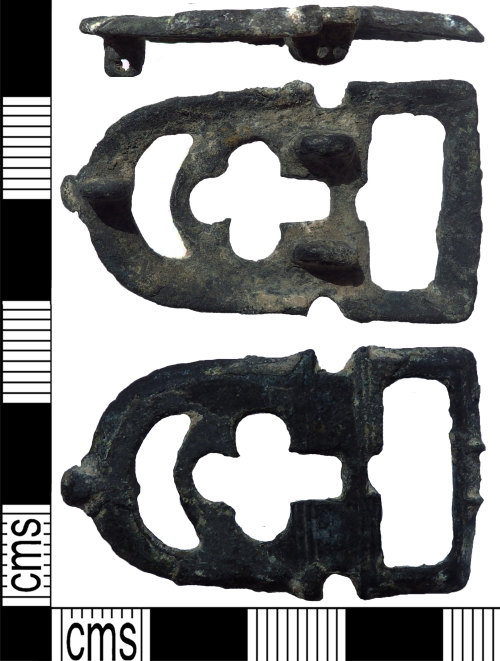 Copper-alloy with lead coating Sucidava buckle of early medieval date (c. 500 - 600 AD). Schulze-Dorrlamm Type D1. The object has a rectangular loop and a D-shaped section that has a crescent-shaped aperture at the round end and an aperture in the shape of a long cross with three rounded arms and one rectangular arm (the latter towards the rectangular loop) in the middle. The two halves are separated by a wide, instepped section which is emphasized on the front face by horizontal grooves on either side. The grooves on the D-shaped section side extend into a pointed knop on either side of the object. There is a narrowed pin bar between the bottom of the long cross aperture and the aperture of the rectangular loop. The outer edge of the object is angled downwards. There is a rounded knop on the outer edge of the D-shaped section, positioned at the apex of the curve. At the corresponding point on the rectangular loop there are two ridges running in parallel transversely across the bar. The back of the object has three D-shaped attachment lugs with circular perforations. These are positioned two on either side of the rectangular arm of the middle aperture and one at the far end of the D-shaped section, just below the knop. The object is dark grey in colour, with patchy white corrosion. However, there are glimpses of shiny brown copper-alloy beneath the dark grey, suggesting that this object has been coated with a lead-based substance, or, alternatively, an alloy component has leached onto the surface. The object is 44.49mm in length, 26.43mm in width and 6.24mm at maximum thickness. It weighs 8.63g.

This type of buckle is a standard Byzantine buckle form and would have been made by one of the Germanic peoples on the continent (Kevin Leahy, pers. comm.). See Schulze-Dörrlamm, M (2009) Byzantinische Gürtelschnallen und Gürtelbeschläge im Römisch-Germanischen Zentralmuseum, pp. 146 - 151 for parallels. The map on p. 150 is particularly interesting as it shows a very dispersed distribution in Europe, with no finds at all in the United Kingdom. The main distribution is the Balkans and the Carpathian Basin, although at least five examples are known from northern France. This discovery is therefore unusual and is significant as being the first of its type to be found in England, although a handful of Byzantine buckles of other types are recorded from Sussex, Kent and Essex. It may possibly have been brought in by someone coming from the region of northern France, or perhaps traded, rather than coming directly from Byzantium (Barry Ager, pers. comm.).

Find number: LIN-B328B4
Object type: BUCKLE
Broadperiod: MEDIEVAL
Fragment of a rectangular buckle frame. The frame is D-shaped in cross-section and undecorated. Slot at the break for a central bar.
Workflow: Awaiting validation