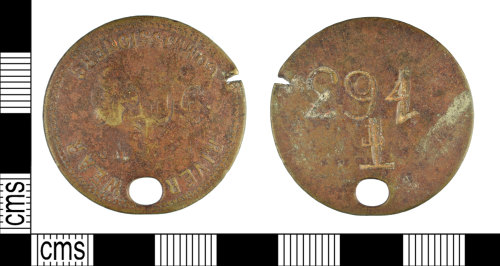 The token is complete except for a small portion missing on the edge. It is circular with a sub-circular perforation.

The obverse reads: 'RIVER WEAR' 'COMMISSIONERS' around the outside with the perforation in between 'River' and 'Wear'. It has been stamped with 'No. 9083' in the centre.

The token is in good condition with only patches of green/grey patina on the reverse.

The 'River Wear Commissioners' were formed in 1717 when a group of Wearside coal owners petitioned parliament with the aim of creating an authority to oversee improvements the to the river through the adoption of new civil engineering techniques. The Wear Commissioners were reformed (at reduced size) in 1859 (Milne 2006, 86).

The following is drawn from http://www.searlecanada.org/sunderland/sunderland008.html :
"It would appear that this ferry, which crossed River Wear from (in the south) the steps at the bottom of Bodlewell (sometimes Boddlewell) Lane [Sunderland], to Monkwearmouth for almost 250 years, was established by an Act of Parliament in 1710. Passage was by rowing boat, though service may later have been provided by a steam powered vessel which 'were tried on this route without a great deal of success. The crossing was, eventually, faithfully served by "Wear" which made the four minute journey regularly for many decades until the closure of the service in 1957.' "

No numismatic data has been recorded for this coin yet.