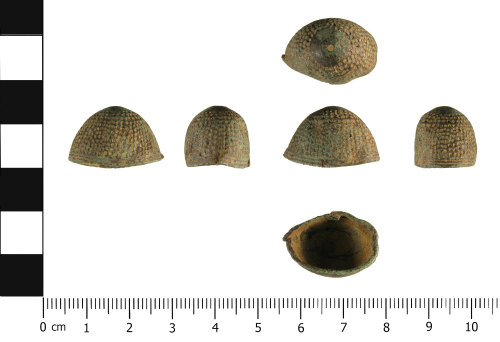 The thimble is circular in plan, and broadly D shaped in cross section / profile, with gentle sloping sides and a pointed domed top. The thimble has been formed from relatively thick cast metal. The base is sub circular in plan, but has been flattened. At the base of the rim there is a rectangular area not decorated with dots, but it has been decorated with two evenly spaced circumferential groooves. The sides slope and taper towards the shallow domed top. The sides have a series of indentations around them. These indentations are arranged in rough horizontal circumferential linear bands, roughly evenly spaced. The indentations themselves are broadly circular in plan and are all of a similar size. The top of the thimble has one single relatively larger indentation at the peak of the dome. Apart from this single indentation, the top of the thimble is plain and undecorated, a feature sometimes referred to as a 'tonsure'.

The thimble is a mid brown in colour with an even surface patina. Abrasion caused by movement whilst within the plough soil may have resulted in the loss of some of the original surface detail.

This style of thimble is commonly known as a beehive thimble, and has been dated to the Late Medieval period (1400-1550 AD) by Holmes (1988). Similar examples have been recorded on the database, including WMID-17C4E8 and WMID-1DBD83.