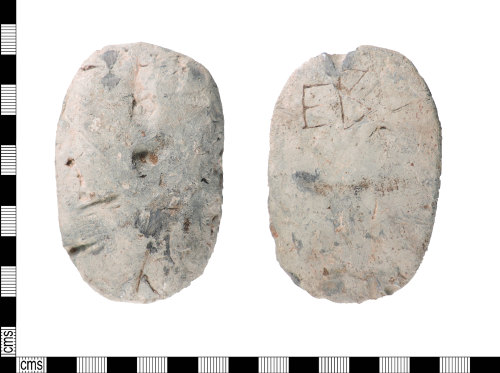 A possible cast lead palm guard dating from roughly 17th-20th century (c. AD 1600 - c. AD 1800). It is a rounded roughly cast oval, with one flat and one concave surface. The concave surface has numerous has several small indentations, presumably due to usage. On the flat side at one end the letters EB are scratched into the surface, presumably the initials of the owner/user. Dating of these artefacts is problematic with the earliest examples probably dating from the 17th century, although they may have been in use right through to the 20th century (Bailey, 1993, page 64).

Find number: PAS-6C2D94
Object type: THIMBLE
Broadperiod: UNKNOWN
A cast lead leather worker's palm guard. This palm guard is sub-oval in plan. One surface is flat with a rough surface and the other face is …
Workflow: Published