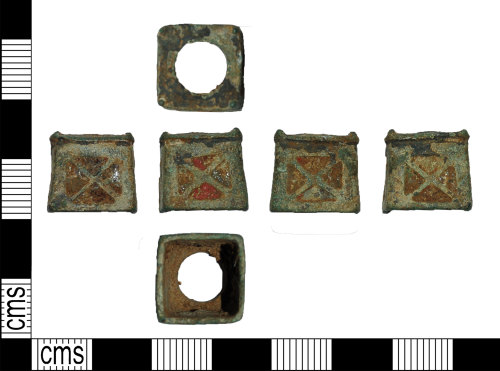 An incomplete cast copper-alloy stand, probably a miniature altar, dating to the Roman period. The object is square in plan with a circular perforation through the flat upper plate and four small knops, one in each corner, protruding from each corner of this surface. These knops would have inserted into holes in the base of an upper tier, stacking them together. Each of the side plates is decorated with a saltire cross with the four recessed triangular cells inlaid with enamel. Much of this enamelling is degraded, but the one side with all four cells entirely or partially surviving intact has red enamel in the upper and lower cells and yellow or orange enamel in the side cells. The stand's metal has a brownish-green patina and is rather worn. The base is hollow. The stand measures 13mm in height, 14mm in width and 15mm in thickness. It weighs 5.5. grams.

These objects are usually interpreted as either miniature tables, stools or altars and are associated with temples as well as fort sites. Parallel objects recorded on the Portable Antiquities Scheme Database include LVPL-7FF030, NMS-38E334, YORYM-9E8875 and NARC-E42213. For further information see Kiernan 2009. 'Miniature Votive Offerings in the North-West Provinces of the Roman Empire'.

Find number: YORYM-9E8875
Object type: MINIATURE OBJECT
Broadperiod: ROMAN
An incomplete cast copper alloy stand of Roman date. Stands such as this have been interpreted as votive model altars and is one tier of a pr…
Workflow: Published