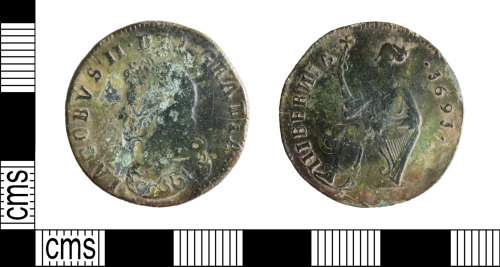 These 'hibernias' are a type of 'gun money', a coinage issued in Ireland when James attempted to recover the English throne. They were the last attempt to establish such a coinage before giving up in 1691. To produce these 'hibernias', shillings were recoined as halfpennies or farthings in the Irish town Limerick. The name 'hibernias' for this coin type comes from the fact that they are the first coins on which the reverse depicts Hibernia, a national personification of Ireland. This was quite symbolic, as the people of Limerick were being besieged by the British and Hibernia can be taken as a contrast to Britannia on the British coins.