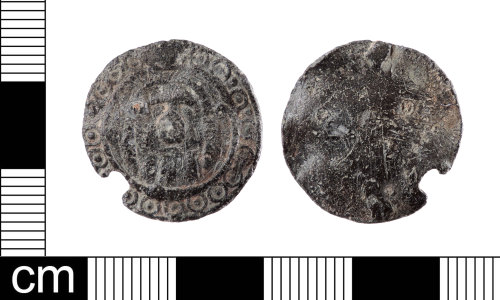 A Medieval cast lead alloy pilgrim badge depicting the 'Veronica' dating from AD 1400-1500. The badge is circular with a central panel bordered by a ring of dot-in-rings. The central panel depicts the bearded face of Christ in low relief. The reverse is blank, with both the pin and catch plate missing. The badge is a little distorted with some damage to the ring and dot border, part of which is now missing.

The Museum of London has an identical badge in its collection 8666b, they write "This is a vernicle, a souvenir of the Veronica in Rome (the Veronica was the veil of St Veronica). Veronica had been moved to pity by the sight of Christ carrying his cross and gave him her veil to wipe his forehead. When he gave it back to her, the image of his face had been miraculously impressed on it. The veil was kept at St Peter's basilica where it was periodically displayed. By the 14th century it was displayed every Sunday and became Rome's chief attraction."