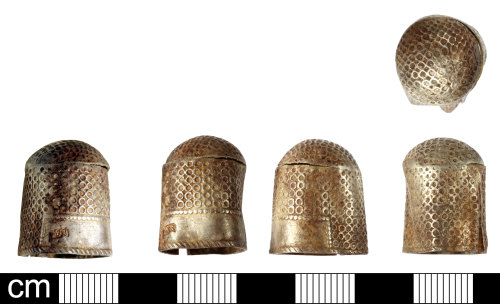 Description: A sheet silver thimble made in two pieces, dating from the c. late 17th-early 18th century AD. The thimble has a high domed top and originally slightly sloping sides, now squashed in places. The top was made separately from the body and they were soldered together, this solder has now cracked and they are only partly attached together. There is also a partially cracked seam running down the body. There is a circular hole punched form the inside near the base and vertical seam.

The body and top are covered in abutting rows of raised rings. There is a cable work border running around the lower edge. Above the border is a plain rectangular cartouche / panel outlined at the sides and top by a line of pellets. This panel is plain apart from a makers (sponsors) mark stamped near the left edge, this is double stamped but appears to read MS.

Discussion: Several similar thimbles have been reported through the Treasure process including 2014 T705, 2014 T965 and 2013 T385 which are thought to date to c.1650-1700. 1923,0203.1 in the British Museum is also similar although the panel is held between two eagles, and it is dated to the 17th century. The makers mark cannot be readily identified as few lists go back this early.

The piece appears to consist of over 10% precious metal and be over 300 years old at the time of finding and as such qualifies as potential Treasure under the stipulations of the Treasure Act 1996.