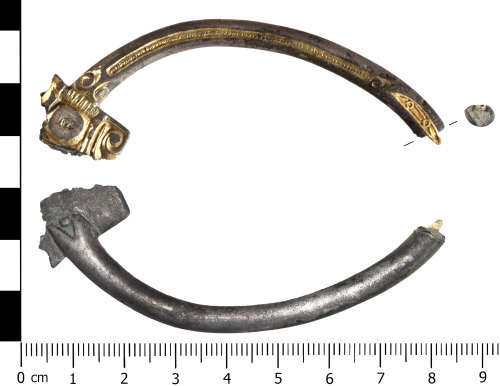 Fragment of a silver artefact, probably an early medieval penannular brooch, with gilding and gold filigree inlay. The fragment comprises part of the hoop and one terminal. The hoop is sub-oval in cross-section and is decorated on the upper surface with a gilded incised design. This begins at the terminal end with two opposing scrolls, behind which (after a small gap) is a slightly recessed, ribbed band running down the centre of the hoop, terminating in a single scroll. At the broken end of the hoop is an elongated semi-circular cell containing a gold sheet inlay, the edge of which slightly protrudes beyond the broken edge. The inlay is decorated with a filigree design comprising a pair of annulets with two parallel lines linking them in centre, and an additional parallel line connecting them to each outer corner. A slight serration to the edge of the filigree wire, visible under magnification, suggests that the wire may have been beaded originally but has worn smooth, giving the appearance of plain wire.

The surviving part of the terminal is trapezoidal in plan. The section adjoining the terminal is decorated with a narrow ribbed band, beneath which is a central raised circle. On one side is a rectangular projection with a scroll motif; the other side has broken off.

Discussion: This fragment appears to derive from an early medieval penannular brooch, although the type is difficult to identify due to its unusual features and decoration. The sub-oval hoop section, gilded ribbed band and gold filigree inlays can be paralleled on penannular and pseudo-penannular silver brooches made in northern and western Britain and Ireland (Youngs 1989, figs 70, 73-4, 78-80; Small, Thomas and Wilson 1973, plate XXXV.a and c) but the style of ornament and the shape of the terminals differs from these. The squared-off shape of the terminal, its 'shoulders' perpendicular to the hoop, more closely resembles Johansen's Type 2 'sub-rhombic' terminals on bossed penannular brooches (Johansen 1973, p. 67, fig. 5), demonstrated by a brooch in the Flusco Pike Hoard (British Museum, accession no. 1991,0109.2; Graham-Campbell 2011, no. 2:4, p. 231); but again the decoration is quite different. Another brooch of similar form, albeit decorated differently and made from copper-alloy, was discovered at Tenby, Pembrokeshire in Wales and recorded on the PAS Database (NMGW-DA579E). This could hint that the unusual features of the Western Rhyn brooch fragment are a consequence of its Welsh/Welsh borderlands provenance. Given that its nearest parallels date to the eighth to early tenth centuries, a similar broad date is tentatively proposed here.

With thanks to Richard Hobbs and Nina Crummy for their comments on this piece.

The object fulfils the Treasure Act 1996 in that it is likely to be more than 300 years old and has a precious metal content exceeding 10%.

Subsequent action after recording: Submitted for consideration as Treasure